CSaP's 2021 annual meeting and reception saw 115 academics, industry representatives, public policy, and medical professionals gather at the Royal Academy of Engineering in London, for the Centre's first in-person networking event since the COVID-19 pandemic. The event on 21 October was an opportunity for science and government networks to share evidence and expertise, build connections and to learn from each other.

"I arrived here with a tremendous buzz. CSaP is doing what it does best - getting dialogue and debates going - and it's wonderful to be back doing it in person."

A panel discussion on child development, learning and mental health was chaired by Paul Kett, Director-General for Higher Education and Further Education at the Department of Education, with invited panellists from the University of Cambridge – Sarah Jayne Blakemore, Professor of Psychology and Tamsin Ford, Professor of Child and Adolescent Psychiatry.

Click on the image below to listen to the discussion

Professor Blakemore began by revealing new knowledge on brain development, which wasn’t known until around 20 years ago. She said MRI scanning has shown that the brain undergoes “substantial” and “dramatic” development throughout childhood, adolescence, and even into early adulthood. She explained that it's these developmental and hormonal changes which make adolescence – defined as a period of life between aged 10 and 24 – a period of vulnerability for mental illness.

As an internationally renowned child psychiatric epidemiologist, Professor Tamsin Ford explained that there was a problem with the language used around mental health. For example, she said while we all have “mental health” not everyone has a “mental illness”, which is influenced by a person's genetics, social situation and psychological make-up.

According to Professor Ford, we should all be worried about the mental health of young people; it is “frightening” that we have gone from one in nine young people with an impairing mental health condition, to one in six during 2020. She also explained there had been a rise in urgent and emergency admissions for eating disorders, and services were “now buckling under the strain.” More optimistically, she said academics and policy professionals shouldn’t underestimate what they can do, that prevention is better than cure, and interventions must be evidence-based. 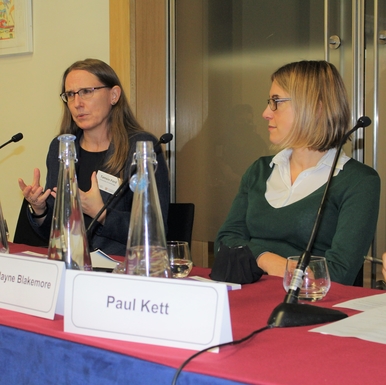 “We have gone from one in nine young people with a mental health condition, to one in six in 2020.”

Professor Blakemore suggested policy makers should re-examine whether GCSEs remain an optimal way of assessing young people and revealed, “exam stress, academic pressure, and fear of failure” is leading to a decline in mental health among teenagers. She explained that GCSEs were introduced before experts learnt about brain changes during teenage years, and, “rote memory based learning is not the best way to retain information in the longer term.” According to Professor Blakemore, social media has both positive and harmful effects, depending on whether young people actively engage with their peers online, or scroll passively.

Professor Ford described how attitudes were changing; parents and young people are now much more willing to talk about their own mental health, compared to 20 years ago. She explained that traditional risk factors of poor mental health – financial debt, food insecurity, and poor housing – still exist and policy makers should ensure everyone has adequate housing, food, and income to live on, as well as opportunities to build social skills. In her closing remarks, she said: "One in six young people with a mental health condition is a frightening statistic, but it does mean five are still doing fine which, frankly, I think is remarkable."

Other sessions at the annual meeting included: Levelling Up and Net Zero.

What's the value of Real World Evidence in the context of the Life Sciences Industrial Strategy?

CSaP hosted a discussion on the potential and limits of real-world evidence and its place in the UK’s approach to life sciences.

In the second episode, Dr Rob Doubleday spoke with Professor Sir David Spiegelhalter and Dr Alexandra Freeman of the Winton Centre for Risk and Evidence ...

Members of CSaP's Horn Fellowship gathered together at Sidney Sussex College for a day of talks with University of Cambridge academics on AI, supply chain ...