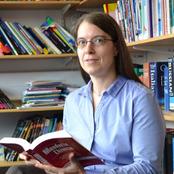 Bettina Beinhoff is a Senior Lecturer in Applied Linguistics and English Language at Anglia Ruskin University. Her research includes second language speech development, constructed languages (such as Dothraki and Klingon), and the connections between language and identity at both an individual and social level. She has recently completed a British Academy-funded project on "Comprehension in the Common European Framework of Reference for Languages: Mapping perceptive abilities to proficiency levels".