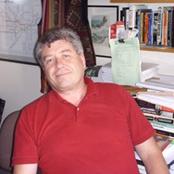 Director of the Centre for Latin American Studies

Dr Charles Jones is a Reader in International Relations in the Department of Politics and International Studies (POLIS) and Director of the Centre for Latin American Studies. He read Moral Sciences and History at Clare College, Cambridge and went on to complete a doctorate on Anglo-Argentine relations before 1914.

Originally a historian of direct foreign investment and the political responses it provoked, Dr Jones helped develop the new field of international political economy by teaching and publishing on North-South relations and developing courses on the politics of international trade and transnational enterprise. Co-author, with Barry Buzan and Richard Little, of an influential critique of neorealism, The Logic of Anarchy (Columbia University Press, 1993), he went on to write E. H. Carr and International Relations (1998). More recently Dr Jones has been working on religion and international relations and the ethics and aesthetics of war and public violence. His most recent book, American Civilization (University of London SAS, 2007) explores hemispheric commonalities, while the next, War Within Reason, provides a critique of the just war tradition.