Senior Lecturer at Department of Computer Science and Technology, University of Cambridge 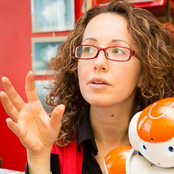 Hatice Gunes is a Senior Lecturer (Assoc Prof) at University of Cambridge's Computer Laboratory. Prior to that she was a Lecturer and then a Senior Lecturer at Queen Mary University of London, a postdoctoral researcher at Imperial College London, and an honorary associate of University of Technology, Sydney (UTS). Hatice's research interests lie in the multidisciplinary areas of affective computing and social signal processing, focusing on automatic analysis of emotional and social behaviour and human aesthetic canons, audio-visual information processing, machine learning and human-computer, human-virtual agent, and human-robot interaction. She has authored numerous papers in these areas, and her work to date has received more than 1900 citations (current H-index=20).

Hatice is currently serving in the Management Board of the Association for the Advancement of Affective Computing (AAAC) and the Steering Committee of IEEE Transactions on Affective Computing . She has also acted as a member of the Editorial Advisory Board for the Affective Computing and Interaction Book (IGI Global, 2011), Guest Editor of Special Issues in International Journal of Synthetic Emotions , Image and Vision Computing, and ACM Transactions on Interactive Intelligent Systems, workshop organiser and chair of EmoSPACE 2015, MAPTRAITS 2014, HBU 2013, EmoSPACE 2013 , AC4MobHCI 2012 , EmoSPACE 2011, as an Area Chair for ACM Multimedia'14, ACII'13, ACM ICMI'13 and IEEE ICME'13, and as a reviewer for numerous journals and conferences in these fields. Hatice has received a number of awards for Outstanding Paper (with M.A. Nicolaou and M. Pantic @ IEEE FG 2011 ), Quality Reviewer (IEEE ICME 2011), Best Demo (with the Semaine team @ IEEE ACII 2009), and Best Student Paper (with M. Piccardi @ VisHCI 2006). She has been involved as PI and Co-I in several projects funded by the Engineering and Physical Sciences Research Council UK (EPSRC) and the British Council.