Lecturer in Communications at Department of Engineering, University of Cambridge 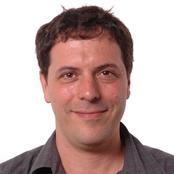 Lecturer in Communications, Department of Engineering, University of Cambridge

Dr Jossy Sayir is a Lecturer in Communications in the Department of Engineering at the University of Cambridge. He has been with the department since 2009. His research interests include information theory, iterative decoding, sub-optimal and quantized decoders.

Dr Sayir received his engineering diploma in 1991 and doctorate in 1999, both from the Swiss Federal Institute of Technology in Zurich, Switzerland. From 1991 until 1993, he worked as a development engineer for Motorola Communications in Tel Aviv, Israel, on the design and quality assurance of a digital mobile radio system. From 1993 until 1999, he worked as a research and teaching assistant under the supervision of Prof. James L. Massey while writing his dissertation "On Coding by Probability Transformation". In 1999, he worked as a concept engineer for Supercomputing Systems AG in Zurich, Switzerland.

From 2000 until 2009, he was a senior researcher at the Telecommunications Research Center in Vienna, Austria and managed part of the centre's strategic research activities from 2002 until 2008. In June 2009 he joined the Department of Engineering at the University of Cambridge on an Intra-European Marie Curie Fellowship that lasted until November 2011. In September 2011, he was appointed as a fixed-term lecturer in Communications at the Department. He has also served on the executive board of the European FP7 Network of Excellence in Wireless Communications (NEWCOM++) and chaired the EC concertation cluster "Radio Access and Spectrum" (RAS) that includes 30 EC projects with a consolidated budget of approximately EUR200m.

Dr Sayir has taught courses on Turbo and related codes at Vienna University of Technology, at the University of Aalborg, Denmark, and a course organised by the Institute for Telecommunications Research in Adelaide, South Australia. He has served on the organization and technical committees of several international conferences and workshops.