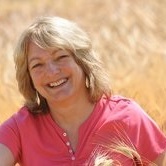 Tina Barsby is Honorary Professor of Agricultural Botany at the University of Cambridge. She retired from her position as Chief Executive at NIAB in September 2021, being appointed in 2008 as the first female Chief Executive in the Institute’s 90-year history. Professor Barsby has extensive experience in plant biotechnology and applied plant science, spanning both academic and commercial research in the agricultural crop sector, including 18 years with the plant breeder Groupe Limagrain.