On 30 June 2022, members of the Centre for Science and Policy’s (CSaP) Horn Fellowship gathered together at Sidney Sussex College, Cambridge for a day of talks with University of Cambridge academics across a wide range of disciplines. The Horn Fellows - named in honour of the late Professor Sir Gabriel Horn - are a small group of supporters who remain committed to the Centre's mission: to help public policy making address the major challenges of the 21st century. The discussions varied from how AI and computer science systems are being used to improve healthcare treatments, to analysing the states of various academic fields and current geopolitical issues, such as the reclassification of the “Great Powers” in Europe today.

A key part of the day’s discussions focussed on the potential use of AI in medical research and interventions. Matthew Juniper (Professor of Thermofluid dynamics, Department of Engineering) described how the same strategies used to design planes could be applied to MRI images. For example, to optimise designs, computer simulations are used that are constrained by physical laws. He further explained that he is applying this process to improve the quality of MRI images of blood flow through arteries, which could provide information on properties of the arteries without invasive procedures. Professor Juniper stated: “My goal is to increase the quality of information available to medics”.

AI is also being used to increase the amount of information gained from blood tests, as explained by Dr Michael Roberts (Senior Research Associate, Department of Applied Mathematics and Theoretical Physics). A full blood count is the most common clinical test in the world, measuring 358 features of blood samples, but only 17 are recorded and used for patient diagnosis. As part of the BloodCounts! consortium, Dr Roberts wants to use AI to analyse this extra data to perform pandemic surveillance, in addition to improving diagnosis and prognostication of disease. For example, the AI was able to detect the COVID-19 outbreak in Cambridge two weeks before the first PCR positive test result.

Additionally, Zoe Kourtzi (Professor of Experimental Psychology, Department of Psychology) described how AI is being used to improve the diagnosis of neurodegenerative diseases that cause dementia. Currently, cognitive tests along with MRI scans are used to diagnose diseases such as Alzheimer’s when symptoms appear. Professor Kourtzi highlighted the need to diagnose these conditions before symptoms start and described how AI has the potential to help. Through training on brain scans, genetics, biomarkers and cognition tests, a recent study showed that AI was able to accurately identify individuals that would later develop dementia and those that would remain healthy. 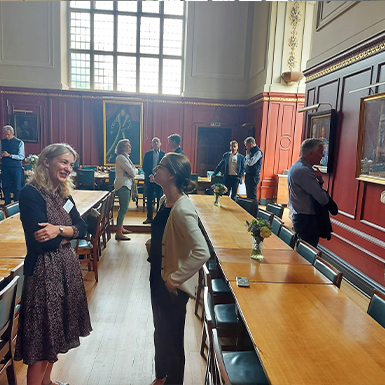 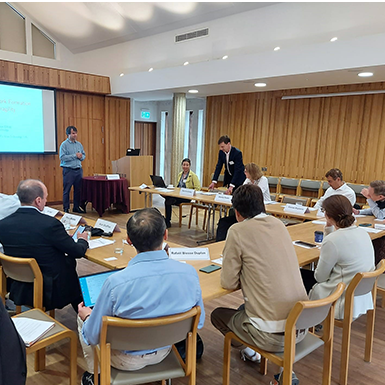 The Horn Fellows also heard from other academics who analysed concepts from various academic fields.

Brendan Simms (Professor in History of International Relations, Department of Politics and International Studies,) discussed whether the view of the five ‘Great Powers’ needs to be reconsidered. Currently, these are recognised as the United States, China, Russia, the United Kingdom, and France. Professor Simms analysed these countries based on five criteria: military strength, economy, reach, reputation, and resilience. He concluded that no other country is stronger than the current top five powers based on the combination of these factors. Professor Simms commented on this continuity of the identities of the great powers: “As a historian, this list of great powers looks very familiar.”

The approach of analysing preconceptions was also highlighted by Dr Magda Osman (Head of Research and Analysis, CSaP) who investigated people’s assumptions about different aspects of decision-making processes. Dr Osman used surveys and experiments to determine people’s perceptions on how they are being manipulated in different situations, the influence of misinformation and the effectiveness of interventions such as nudging to alter behaviour.

Performing surveys and examining evidence was also a key part of assessing the impact of high frequency trading (HFT), as discussed by Professor Oliver Linton (Professor of Political Economy, Faculty of Economics). Professor Linton described his work on a governmental science foresight project: ‘The Future of Computer Trading on Financial Markets’. This project produced several key findings about the role of HFTs in markets, including how the fear of increased market manipulation by HFTs was largely unfounded.

Also on the topic of financial consequences, Matthew Elliott (Professor of Economics, Faculty of Economics) explained how he is using mathematical models to understand supply network formation and fragility. Professor Elliot identified the impacts of the number of suppliers and the strength of the relationships between suppliers on the reliability of a supply chain - highlighting the value of supplier diversity in mitigating disruption.

We are delighted to announce the launch of an ambitious and exciting new programme in science and policy research.

Magical thinking; the way towards a more sustainable future?

The third of our 2016 series of climate seminars included talks from Dr Richard Fraser and Professor Paul Linden. Recordings of the first two seminars ...