at Department of Plant Sciences, University of Cambridge 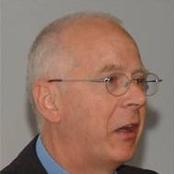 Regius Professor of Botany and Fellow of Trinity College, University of Cambridge

David Baulcombe has been the Regius Professor of Botany and Head of the Department of Plant Sciences at the University of Cambridge since 2007. His current research follows on from his discoveries made in The Sainsbury Laboratory in Norwich, of a novel type of regulatory RNA known as siRNA or RNA silencing. His research later discovered the role of siRNA in protecting plants, and animals, against viral attack.

At Cambridge he continues to investigate the mechanisms and biological role of RNA silencing in disease resistance and in addition the link between RNA silencing and the control of gene expression at various stages of the plant life cycle. He is particularly interested in the potential of RNA to initiate epigenetic effects - changes in gene expression that persist through cell division or even from one generation to the next - and their role in evolution.

Outside of the laboratory he is involved in promoting the use of plant biotechnology for crop improvement, particularly technologies that address crop problems in developing countries. He participates in a consortium that addresses sweet potato virus disease and plans to initiate other projects on strategies for developing disease resistant germplasm, including GM technologies.

David received his knighthood and was elected a Fellow of Trinity College, Cambridge in 2009. His most recent award is his election to Fellow of the Academy of Medical Science in 2010.