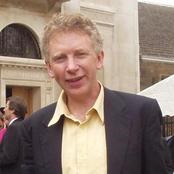 His research interests include railway noise and vibration, gyroscopes and boomerangs, wave power, renewable energy, and vibration of bell towers. His current projects include research into the failure of wind-turbine gearboxes and a dynamic model to predict the occurrence of skidding in wind-turbine bearings; sustainable energy (in particular wind and wave power); and a new project to examine the possibility of cooling the planet by means of Solar Radiation Management. This work was prompted by a report from The Royal Society which recommended that geoengineering research be a UK priority.