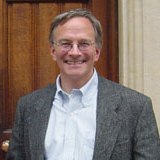 Jim Secord is Professor of History and Philosophy of Science at the University of Cambridge, Director of the Darwin Correspondence Project, and a fellow of Christ’s College. His research and teaching is on the history of science from the late eighteenth to the present. He has published several books, including Controversy in Victorian Geology (Princeton, 1986) and editions of the works of Mary Somerville, Charles Lyell, and Robert Chambers. Victorian Sensation: The Extraordinary Publication, Reception, and Secret Authorship of Vestiges of the Natural History of Creation (Chicago, 2000), an account of the public debates about evolution in the mid-nineteenth century, won the Pfizer Prize of the History of Science Society.

Professor Secord studied the history of science, geology and literature at Pomona College and Princeton University. His writings include studies of Darwin's early geology and the acclaimed Victorian Sensation: The Extraordinary Publication, Reception and Secret Authorship of 'Vestiges of the Natural History of Creation'

He has recently published on scientific conversation, scrapbook-keeping, and public scientific displays. His most recent publication is a selection of Darwin’s evolutionary writings from Oxford University Press, which includes the autobiographical Recollections and responses to Darwin’s books from around the world. He is currently completing Nature as News, a study of the relation between scientific practice and the newspaper press in London, Paris, and New York.