Cavendish Professor of Physics at Department of Physics, University of Cambridge 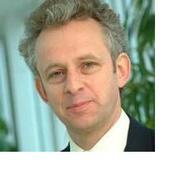 Sir Richard Friend's research concerns the physics and engineering of carbon-based semiconductors. He pioneered the study of organic polymers and the electronic properties of molecular semiconductors. He is also one of the principal investigators in the new Cambridge-based Interdisciplinary Research Collaboration (IRC) on nanotechnology, and co-founder of Cambridge Display Technology (CDT), Plastic Logic and Eight19, whose printed plastic solar technology is designed to deliver flexible, lightweight, robust and lower cost solar cells for a variety of solar-powered applications.

He has over 600 publications and more than 20 patents.

Sir Richard’s research has been used to develop flat panel displays and future screens that can be rolled and transported. He founded the company Cambridge Display Technology Ltd to capitalise and bring to market the first products using this latest semiconductor technology.

In March 2003 he won the IEE'S Faraday Medal. He was knighted for services to physics in the Queen's Birthday Honours List in 2003 and in 2010 he was elected as one of the three laureates of Millennium Technology Prize for the development of plastic electronics.