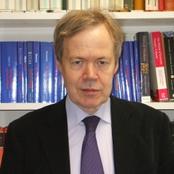 Andrew Gamble is a Professorial Fellow at the Sheffield Political Economy Research Institute, based at the University of Sheffield. He previously worked at the University of Cambridge, where he joined POLIS in 2007. Before that he was Professor of Politics at the University of Sheffield, where he was a founder member and subsequently the Director of the Political Economy Research Centre, and a Pro Vice-Chancellor. He read economics at Cambridge for his first degree, then political theory at Durham before returning to Cambridge for his PhD in social and political sciences. He is a joint editor of New Political Economy and The Political Quarterly, and a Fellow of the British Academy and the Academy of Social Sciences. He was awarded a Major Research Fellowship from the Leverhulme Trust in 2004, and in 2005 received the Sir Isaiah Berlin Prize for Lifetime Contribution to Political Studies from the UK Political Studies Association.

In 2016 he published his latest book, "Can the Welfate State Survive?"