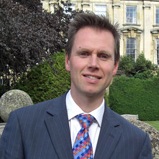 Toby Wilkinson is the Deputy Vice Chancellor for External Relations at Lincoln University. He was previously part of the University of Cambridge International Strategy Office, working with the Pro Vice Chancellor (Jennifer Barnes) to support the schools, faculties and departments in their international engagements, and to develop the University's international strategy, particularly with regard to research collaborations and relationships with the EU, US, India and China. Prior to this, Dr Wilkinson was the Development Director at Clare College as well as Chairman of Cambridge Colleges Development Group.

As an acknowledged expert on ancient Egyptian civilisation and one of the leading Egyptologists of his generation, Toby Wilkinson has lectured around the world. He has excavated at the Egyptian sites of Buto and Memphis. He is a member of the editorial board of the Journal of Egyptian History and has broadcast on radio and television in the UK and abroad, including BBC’s Horizon and Channel 4’s Private Lives of the Pharaohs, and was the consultant for the BBC’s award-winning documentary on the building of the Great Pyramid.