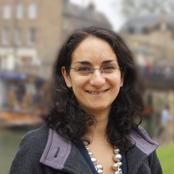 Halima took up her new role at the Greater London Authority in January 2020. Her remit also covers health, education, youth and food.

Previously, Halima was Executive Director of the Nesta Health Lab, an initiative from Nesta to create a people powered health system. Health Lab brings together Nesta's practical work on health and ageing to achieve more impact.

Halima has spent fifteen years working on public service reform and innovation, mainly in central and local government with a particular focus on social care, health and disability. She was previously a Director in Nesta's Innovation Lab, overseeing a number of programmes including People Powered Health. Prior to joining Nesta in December 2010, Halima was Deputy Director at the Strategy Unit, Cabinet Office, providing policy advice to the Prime Minister, No.10 and Cabinet Office ministers on a range of domestic policy issues.

Halima studied Geography at Oxford University and has a Masters in Public Administration from the Harvard Kennedy School, where she was a Knox Fellow. Halima was previously a member of the Council of the Winston Churchill Memorial Trust and is now a Trustee of Diabetes UK.

To read about Halima's experience as a Policy Fellow in Cambridge see here.