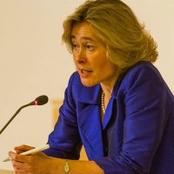 Reader in European Politics and Director of the European Centre, Department of Politics and International Studies, University of Cambridge

Dr Julie Smith (Baroness Smith of Newnham) is Director of the European Centre in the Department of Politics and International Studies, Cambridge University, and a Fellow in Politics and Graduate Tutor at Robinson College, Cambridge. Since 2016 she has been Co-Director of the MSt in International Relations, the two-year part-time Masters programme co-organised by POLIS and the University’s Institute for Continuing Education.

Julie read PPE at Brasenose College, Oxford, and took both her MPhil and DPhil in Politics at St. Antony’s College, Oxford. She was a Hanseatic Scholar in Hamburg and prior to coming to the Centre of International Studies in Cambridge in 1997, Julie taught in the International Relations and European Studies Department of the Central European University in Budapest. An expert in European politics, Julie was Head of the European Programme at Chatham House (the Royal Institute of International Affairs) from 1999 until 2003. She has been a member of the House of Lords since 2014 and a member of the Lords’ International Relations Committee since 2016.

Julie’s main research interests are in the history and politics of the EU, with a particular interest in the UK’s relations with the EU. Her work has included European elections and referendums as well as the role of the European and national parliaments in the EU. She has been the Cambridge PI for various collaborative projects, including the Erasmus + PADEMIA network on Parliamentary Democracy in Europe and the INCOOP Marie Curie Initial Training Network on inter-institutional relations in the EU. She is currently involved with VIADUCT, a Jean Monnet network on Enhancing Academic Dialogue between the EU and Turkey. In addition to her work on the EU, she has written on various aspects of Liberalism, including the history of the Liberal International. She was the Founding Editor of the Edward Elgar Series on New Horizons in European Politics (2011-17) and now edits a new series for Routledge: Europa EU Perspectives: Reform, Renegotiation, Reshaping..