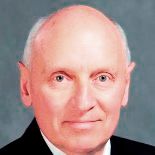 Sir David Wallace CBE FRS FREng was the Master of Churchill College, Cambridge, and Chair of the Board of the Møller Centre between 2006-2014. For five years he was also Director of the Isaac Newton Institute and the second N.M. Rothschild & Sons Professor of Mathematical Sciences in the University.

Sir David is also a Fellow of the Institute of Physics and the Institute of Mathematics and its Applications. He has held a number of honorary positions, including Treasurer and Vice-President of the Royal Society, and President of the Institute of Physics. He has served as a member of the Engineering and Physical Sciences Research Council and the Scottish Higher Education Funding Council, as an Expert to the European Commission, and as Chair of the UK e-Science Steering Committee and the Council for the Mathematical Sciences. His non-Executive Directorships have included the Scottish Life Assurance Company and Taylor and Francis Group PLC. He was awarded a CBE for services to parallel computing in 1996, and was knighted in 2004 for services to UK science, technology and engineering.