Professor of Ocean Physics at Department of Applied Mathematics and Theoretical Physics (DAMTP), University of Cambridge 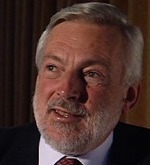 Professor of Ocean Physics, and Head of the Polar Ocean Physics Group, Department of Applied Mathematics and Theoretical Physics, University of Cambridge

Peter Wadhams Sc.D. is Professor of Ocean Physics, and is an oceanographer and glaciologist involved in polar oceanographic and sea ice research and concerned with climate change processes in the polar regions. He is also an associate professor at the Laboratoire d’Océanographie de Villefranche in France, run by the Université Pierre et Marie Curie. He leads the Polar Ocean Physics group studying the effects of global warming on sea ice, icebergs and the polar oceans. This involves work in the Arctic and Antarctic from nuclear submarines, autonomous underwater vehicles (AUVs), icebreakers, aircraft and drifting ice camps. He has led over 40 polar field expeditions.

Professor Wadhams' first degree was a BA (Hons.) in Physics at Churchill College, University of Cambridge. While at college he was an assistant on the "Hudson-70" Expedition, an 11-month Canadian cruise which accomplished the first circumnavigation of the Americas. This included multidisciplinary oceanographic and marine geophysical work in South Atlantic, Antarctic, Chilean fjords, S and N Pacific, Beaufort Sea and NW Passage. Later he was Director of the Scott Polar Research Institute, Cambridge (1987-92) before moving to his present position. He has been awarded the Polar Medal by HM the Queen, and the Italgas Prize for Environmental Sciences. He is a member of the Scientific Committee of the European Environment Agency, Copenhagen, and a Member of the Finnish Academy.